began her ballet career in Paris, France where she attended ballet lessons with Marie Lascar and performed at the Trocadéro. She later studied under Paris Opera Ballet Master, Raymond Franchetti. She studied modern dance there with Joseph Roussillo and jazz at the Salle Pleyel. Later on she moved to the United States and spent one year at the Boston University and studied modern drama, film and art. Then she spent three years at the Boston Conservatory of Music and majored in dance.

In the next few years she taught at the Joy of Movement Centre while continuing to study with the Boston Ballet Company class. Then with husband, Robert, she moved to the south shore of Boston where they started their own school and company ‘Ballet Bizarre’ home to their own original choreographies of Alice in Wonderland, the Little Prince, Genesis and others. Creations consisted of Ballets in four acts, using different styles of music from rock, jazz and classical.

Since 2001, Diana with the help and company of her two daughters, Cora and Leah, has traveled through the western Cape Breton delightful countryside, to offer ballet and modern dance classes, and  she has taught many children and adults to build up the school of Ballet Bras dor. She first met with Karen Ann Campbell from Sydney Mines and her Damhsa Breacan troupe and enjoyed the highly disciplined and committed highland dancers. Two choreographies were born of the interesting union of highland, step, ballet and jazz: Sapphire to Peter Neros symphony in blue, and Celtic Ballet to Brenda Stuberg and Rawlins Cross.

In the Acadian community of Cheticamp, she worked closely with dancers from la Swing du Suete encouraged by Paul Gallant , director of the Cheticamp council of the Arts,  himself a choreographer.

In 2002 the Lambies started classes in Baddeck, Wagmatcook, and in Margaree . The first annual gala featured, Alice in Wonderland from Lewis Carroll, and Powers of the Above, inspired by the  symphony number one of Tchaikovsky.

2003 saw the addition to  the traveling school of the Inverness Art Center with the help of Carrie Fraser. The boys, girls and adults of all the different communities met for classes and rehearsals of the second gala, Alice through the Looking Glass and Peter and the Wolf,  Prokokiev s original version.

In the fall of 2004, a new and exiting provision came to the school; the visit of The Atlantic Ballet Theatre of Canada. The company came to perform les portes tournantes. Prior to the evening show,  the students were invited to a special workshop taught by the artistic director Igor Dobrovolskiy, right on the stage of the Savoy Theatre in Glace Bay, a boost  indeed for the young rural school. Since this first event, the dedicated students have had the privilege to benefit from many more such workshops. Professional members of  the company have traveled to the island and expanded the students understanding of ballet technique, and inspired them. Amadeus and the Phantom of the Opera  both were produced by ABCT at Mabou Strathpey Place and thrilled local audiences.

Diana has worked with highland and Celtic dancers. A new and exciting avenue for choreography, integrating the traditional dances with the ballet and modern techniques in this ever changing art of Dance.

In 2005 Diana met with Dianne Milligan and became connected with  the  umbrella organization of Dans Nova Scotia. This also brought tremendous benefits to the students. This alliance meant more workshops and professionals coming from all over the country. A more kinetic, scientific approach from Bob mac Cullum, a teacher from the National Ballet School and others has rounded out the vision of everyone from the benefits of dance especially the importance of good posture and dynamics.

2005 also saw the first full story production of the Little Prince. Saint Exuperys delightful tale, followed in 2006 by the Book of the Jungle. by Rudyard Kipling . Both four acts Ballet productions included narration and slides presentations. The work and talents of many volunteers have helped to create the story book effect coming to life on stage.

On May 23 2007, we will host a matinee show, for elementary school children, at the Strathpey in Mabou at 11 am and an evening show for the public of The Fantastic Toyshop . This summer Yuliia Schevchenko is returning for a week long program at the Inverness Arts Center.

As a dancer, teacher and choreographer, Diana’s relationship to the art of dance is a passion that has now spun over many decades. Since the beginning of this relationship, she was determined to be a choreographer and composed dances at a very early age. As a Parisian she was especially inspired by Maurice Bejart’s avant garde productions and always believed that dance is a universal language which can delve into ideologies as well as emotions.  The possibilities are therefore endless. For the last ten years the experience of teaching in rural areas, choreographing on her students, and working with  other professional dancers and their inspiring workshops, brought new depths to her teaching techniques and choreographies. The young dancers  have benefited and progressed and some achieved new levels in their technical abilities  and their over all performance.

Ballet Bras d’Or  School of Dance’s vision is to use this art in a noble way, to create contemporary ballets that deal with important questions of our age while painting the beauty of life on a canvas where colors, lights, music and movements are intertwined.

Each production has been for all concerned, dancers, craftsmen and parents, an adventure and an avenue for the imagination to run free. It has been an occasion to work side by side, children and adults alike, in a creative endeavour where each one’s talent is explored and appreciated. Without the help of so many volunteers none of it would have been possible. 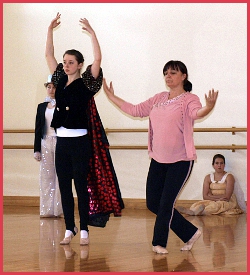 2010, we revisited “the little Prince.  In May 2011 the production of ‘Alice’ combined the former ballets of ‘Alice in the Looking Glass’ and ‘Alice in Wonderland’ with an epilogue unique to our time, inspired by Robert Lambie. In June 2012 Kipling’s ‘Book of the Jungle’ was explored again with a combination of scenes from the former 2006 ‘Book of the Jungle” with the addition of compositions by Anastasia Feigin and Leah Lambie, our dancers, who continued their dance studies in college and brought their new and exciting contemporary movements to their solos and duets.

We are this year concentrating on rebuilding the school with a new studio in Middle River at the foot of the Highlands on our beautiful farm and hope to gather our dancers to this location by next year.

Comments Off on Meet the Director